By the time Greta Thunberg, age 16, sat on the stage of the opening session of the 2019 UN Climate Action Summit, she was years into her crusade to help the environment. She had already organized school strikes, addressed European parliaments, and given a TED talk. She was ready with an answer when the convention’s moderator asked her, “What’s your message to world leaders today?”

“My message is that we’ll be watching you,” the teen from Sweden said with a sharpness in her eyes and a seriousness in her voice that silenced the room. And with 10.6 million followers on Instagram, the world is watching her, too.

Thunberg is part of the rising generation who came into this world with smartphones, the World Wide Web, and light-years of technological advancement at their fingertips. Generation Z—also known as Gen Z, iGen, or zoomers—ushered in the first era of “digital natives,” and as a technically savvy, tuned-in populace, they find themselves in a unique position to be influencers, even at young ages.

More ethnically diverse and on track to be more educated than many of their predecessors, their influence is felt both commercially and politically on social media, as corporations have adapted specific strategies to reach them, and whole movements have formed and fallen around something as simple as a tweet. But Gen Z’s digital presence appears to be both a blessing and a curse. They may be poised to influence the world, but with rising suicide rates and mental health challenges, their power comes at a price.

This generation could be better equipped to effectively solve some societal problems, but as Thunberg said in her remarks to the leaders gathered at the United Nations, they shouldn’t have to. “This is all wrong,” Thunberg said. “You all come to us young people for hope. How dare you?”

Who Are We? In a sorority house at the U, sophomore Reede Nasser is using social media for a different reason. She’s vice president of marketing for the Panhellenic Council, and today, she’s taking over the U’s Instagram stories, letting followers know how they can get involved.

“I joined the Greek community because I wanted to find a group of people that would have my back every day all day,” Nasser says from her bedroom, with white paper butterflies hanging on the wall. She has a ring on every finger, half-inch-long acrylic nails, gold-rimmed glasses, and a fuzzy, buttoned, cropped sweater. As a Gen Zer, Nasser is part of what some have called “the loneliest generation,” but she smiles as she talks to the camera.

Gen Z babies were born between about 1996 and 2010, as email and the Internet became household tools. They have some similar tastes to the generations that came before them—for example, Gen Z shares Millennials’ appreciation for the colors blush pink, peach, and mint—but their love of brightness has led to a proliferation of “Gen Z yellow,” which can be seen everywhere from clothing to carpet.

This generation is on track to be more educated than previous birth cohorts at comparable ages. In 2018, 57 percent of Gen Zers were enrolled in college, compared to 43 percent of Gen Xers in 1987. Having the Internet and smart devices has conditioned Gen Zers to thrive on information and technology and sort through messages quickly. With an attention span of eight seconds, Gen Z is a demanding audience.

But there is a darker side to Gen Z. While every generation is defined and shaped by major events—World War II, the Great Depression, and 9/11, to name a few—Gen Z is facing its share of global challenges and an internal crisis as well. Suicide rates are at an all-time high among people age 10-24, according to the Centers for Disease Control and Prevention.

With an increase rate of 56 percent from 2007 to 2017, suicide has become the second-leading cause of death for this generation, after unintentional injuries.

“In the last five years, the indicators for depression, self-harm, and suicide have continued to increase,” says Jean Twenge, professor of psychology at San Diego State University and author of iGen: Why Today’s Super-Connected Kids are Growing up Less Rebellious, More Tolerant, Less Happy—and Completely Unprepared for Adulthood—and What that Means for the Rest of Us. “Teen depression keeps reaching all-time highs in the data every single year. The latest data available shows that those trends, unfortunately, have only grown worse.”

Some 61 million Gen Zers are set to enter the workforce, and they account for nearly one-third of our country’s population. While these digital natives are more diverse, educated, and socially conscious than previous generations, they also face issues such as a shockingly high suicide rate and a host of mental health concerns.

“More young people are experiencing not just symptoms of depression, and not just feelings of anxiety, but clinically diagnosable major depression,” Twenge writes in her book. “The sudden, sharp rise in depressive symptoms occurred at almost exactly the same time that smartphones became ubiquitous and in-person interaction plummeted.” Working with and raising a new generation is no easy feat—here are some strategies to keep in mind.

HOW TO RAISE THEM

1 Ban devices (phones, tablets, laptops) in the bedroom after lights out.

2 Encourage and help your kids plan in-person activities and interactions.

3 Sneak in meaningful time with your kids with short activities like going for a walk or a drive to the store.

4 Even brief touches like a half embrace or fist bump can alleviate anxiety and create bonds. Give ‘em a hug.

5 If kids have phones, use parental controls and monitor for inappropriate content and cyberbullying on a regular basis.

HOW TO WORK WITH THEM

6 Don’t be surprised if your employees ask difficult questions about societal issues.

7 You can’t just focus on the customer. You also have to focus on other issues affecting your customers like environmental needs, social justice, and community issues.

8 Regularly check in. Even more used to instant reaction than previous generations, Gen Zers may thrive with more frequent and immediate feedback.

9 Create and then spotlight your equity and inclusion efforts.

10 Expect Gen Z employees to know more about the inner workings of your company—including typical salaries, work culture, etc.—than others, thanks to their digital skills.

They are setting themselves up to be the changemakers that the world needs.

Most generations have defining events that monumentally shift how people view the world around them. Here are some from the last century.

What Do We Want? When Reyes Aguilar JD’92, associate dean of admissions in the U’s S.J. Quinney College of Law, started his job 30 years ago, everything he did was on paper. The most thrilling technology he used was voicemail. Now, as the college has shifted its marketing approach to connecting with students digitally, voicemail seems like the only thing he gets when he makes a call. Even if times are changing, and students get acceptance texts or emails now instead of letters, there are some things Aguilar insists should stay the same. “I try to call everybody with our admissions decision before the email is sent,” he says.

Many companies have adjusted their marketing strategy to reach Gen Z, which has helped some and hurt others. For undergraduate recruiting on campus, the U has begun to supplement its traditional brochures and mailers with digital marketing, outreach on social media, and targeted advertising with messages that resonate better with Gen Z. Applications to the U rose to record numbers in 2021. At the College of Law, applications are up 43 percent so far this year, compared to 2020.

“Gen Z wants transparency. They want engagement, ‘Give me the facts, give me the truth, pull back the curtain and show me you’re being real,’ ” says Brian Rasmussen BA’80, marketing director at the U.

Companies who successfully connect with Gen Z benefit from the loyalty of a generation that has a spending power of $140 billion. In fact, 68 percent of respondents to the Edelman Trust Barometer survey in 2021 agreed that consumers have the power to force corporations to change, and 86 percent said they expect CEOs to publicly speak out about societal challenges.

“Neutral is a bad stance,” says Jeff Fromm, author of Marketing to Gen Z and partner at Barkley, a national marketing and advertising firm. “The highest-performing brands have a heavy dose of empathy.” When marketing efforts fall flat or companies stay silent, Gen Z can use their own social media platforms to respond, and sometimes, demand action.

“Gen Z has had the foundation laid for them to embrace who and what they are,” says Emily Lyman HBS’07, founder and CEO of Branch and Bramble, a digital marketing agency based in Brooklyn, New York. “They are unapologetically saying, ‘This is what we want, and we’re not going to support you unless you give it to us.’ ”

As Gen Z responds to brands that demonstrate authenticity, Aguilar’s unwillingness to let go of his sincere, old-fashioned approach may just be a blessing in disguise. “When I first started doing this, 90 percent of the time the person I called would answer the phone and they’d be caught off guard,” Aguilar says. “It was very touching: some people would cry, some would excitedly scream at their partner, ‘You won’t believe this!’ Now it’s actually pretty rare that someone picks up, so I leave a voicemail.” 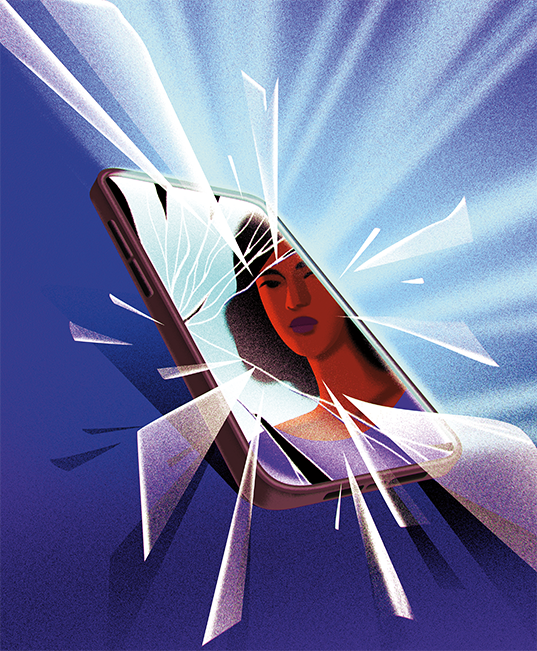 When Do We Want It? Austin Hendrickson BS’20 gets 20-30 breaking news alerts on his phone a day, and it’s exhausting. Breaking news is never good, he says. It’s just negative, and everywhere. Even though the constant bar-rage is overwhelming, he can’t unplug. “It makes me feel like a terrible person,” he says. “If I don’t know what’s going on in the world, then I can’t be doing what I can to make it better, even if that’s nothing more than knowing.”

At age 22, Hendrickson is on the older end of Gen Z. He’s enrolled in the Harvard Graduate School of Education, attending remotely during the pandemic. He works for the U’s Sorenson Impact Center, gathering input from students around the country about their higher education experiences and sharing it with higher-ed decision makers.

Since grappling with his identity as a gay man started him on a learning journey about social inequality, Hendrickson has spent a considerable amount of time seeking to under-stand the experiences of marginalized groups, and he feels a responsibility to take action against systems that perpetuate discrimination. Like Thunberg, his connection to knowledge and many opportunities to act on the issues that are important to him come from technology.

According to a study issued by Gen Z think tank Irregular Labs, 73 percent of respondents age 15-24 in 2018 said being politically active or socially engaged is important to their identity, and part of being a good citizen. They aren’t the first generation to protest and demand change, but they also aren’t stopping with the progress of their progenitors.

“Gen Zers as a whole face an uncertain future,” says digital marketer Lyman. “With COVID and the political land-scape changing drastically recently, they are now in a less certain world and time. But they are very politically active and will likely be changing policy in the not-so-distant future.

They are also setting themselves up to be the changemakers that the world needs, and I think that is something that needs to be celebrated.”

For Hendrickson, seeing fellow Gen Zers like Thunberg fight for what they believe in is empowering. It’s enough to keep the news alerts coming, with hope for the future. “Not all responses to this generation’s progressivism have been positive,” he says. “The knowledge that Gen Z has already accomplished powerful and important things despite the condescension of critics, however, is a constant force of inspiration for me in striving to do the same.”