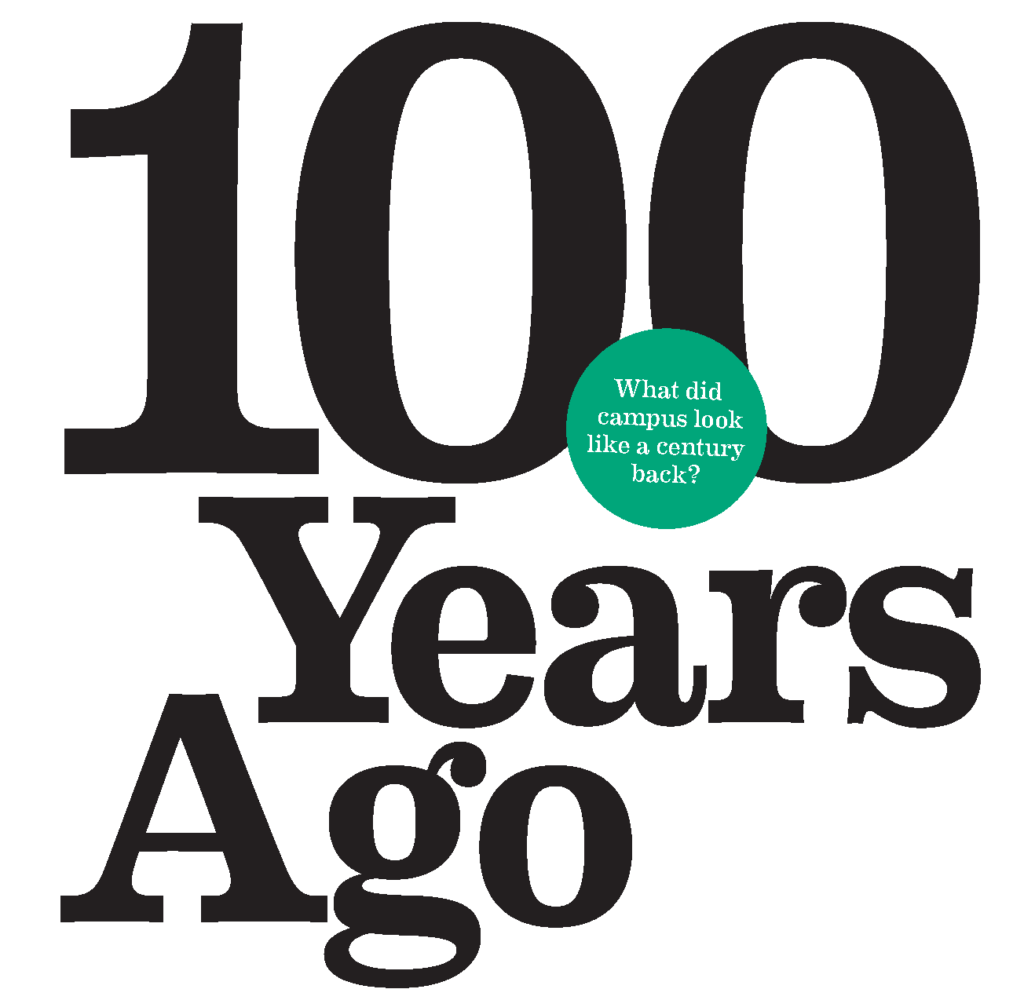 Campus is rapidly transforming. From large-scale housing projects to a new medical school facility in progress, what students see walking to class is very different today than it was even 10 years ago. But what if you could turn back the clock 100 years? What would this area look like? Follow along in these pages as we tour some of the U’s buildings constructed at least a century ago. Or use this as a guide to visit these historic spots yourself.

Our tour starts on South Temple and 400 East. Previously known as the Enos Wall Mansion, this was Utah’s first “fireproof” building encased in a cement plaster. While you wander, consider the meetings and classes held here, as it has housed the Salt Lake Jewish Center, the Pacific National Life Assurance Company, and even the LDS Business College. It was designed by German-born architect Richard K.A. Kletting, who also designed the State Capitol and three of the four buildings in Stop No. 4. Thanks to a generous gift from The Church of Jesus Christ of Latter-day Saints and other community partners, it’s now home to the U’s Kem C. Gardner Policy Institute, a leading voice on public policies impacting the Beehive State.

Make your way up to main campus and gaze at an unassuming—yet elegant—building tucked behind the Libby Gardner Concert Hall. This small, gray structure was originally built to be a heating and foundry plant for campus. But don’t let its humble beginnings fool you. In 1944, it served as home to Ballet West’s forerunner before becoming headquarters for KUED and KUER in 1991. It was here that the Utah Education Network was launched. Then, in 1994, the current occupant—Utah Lyric Opera Ensemble—took up residence. 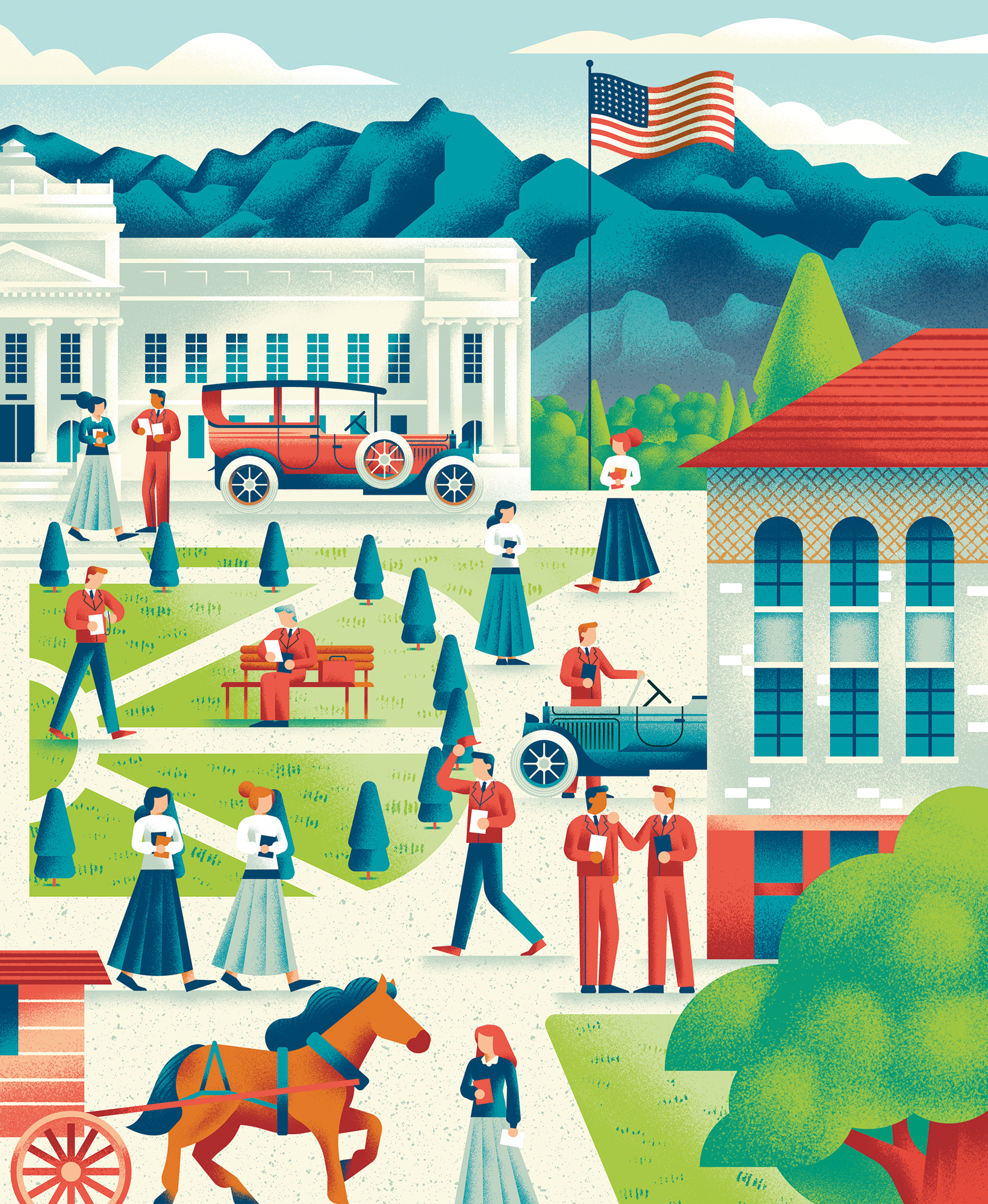 Take a few steps to the east. Originally intended as an industrial space, it was devoted to the medical school after the end of WWI. The current medical school was opened in 1965, and it’s also about to undergo a major renovation, with the new Spencer Fox Eccles School of Medicine slated to open in 2025.

Just west of the Campus Store lies the next destination. Originally a mess hall, it accommodated 600 people at a time. Now, you can see some of the finest student productions in the 108-seat theater, Studio 115.

It’s time to head up the hill. Founded in 1862 as Camp Douglas, named after Illinois senator Stephen Douglas, this National Historic Landmark has seen everything from German prisoners of war in the early 1900s to the Olympic Village in 2002. It was the training grounds for thousands of recruits in WWI, and it housed the 7th Bombardment Group operating B-17 Flying Fortresses in WWII. There are more than two dozen structures here that date back well over 100 years.

As you roam around the houses, bandstand, and other gathering places, consider spending a few extra moments at a couple of our favorite stops.

The oldest building on campus (1874), it was originally an Army barracks. Now, it hosts exhibits about the history of Utah and other western states. Kids of all ages will love the outdoor Military Vehicle Park, complete with cannon and tanks.

Built in 1884, the Post Chapel in Fort Douglas has stood the test of time—but not without some help. It underwent major renovations leading up to the 2002 Olympic Winter Games and now serves as an interfaith center for multi-
denominational use.

Take a jaunt to the top of Presidents Circle. Gazing out across the horizon from this vantage, it’s easy to imagine the interwoven connection the U has with the city and state—a relationship built over the course of 150 years as the first state university west of the Missouri River. Originally called “Central Building,” it was renamed in 1919 after former U president John R. Park. Now it’s home to the Office of the President and other university administrators and is a symbol of the tradition and excellence of the U.

Originally called the University of Deseret and founded in 1850, it was renamed the University of Utah in 1892. Two years later, Congress granted a 60-acre tract of land to the U from the Fort Douglas Military Reservation. The state legislature appropriated $200,000 for the first four buildings—physical science, liberal arts, education, and a museum—that now make up Stop No. 4. After the plan was announced, the Salt Lake Tribune wrote, “There will be no University in the world that will command so magnificent a site…. The people who will be here will declare that the University is on the most delightful spot that can be found in a journey around the world.”

The original layout called for a circular drive with one main entrance. However, after the first four buildings were complete, the Board of Regents expanded the plan into the horseshoe shape you still see today.

Exit Presidents Circle and head southwest to our next stop. Take note of the building’s original construction, as it’s about to undergo a major renovation. While preserving the historic character, when complete, the remodeled home of the departments of Physics & Astronomy and Atmospheric Sciences will have space for more than 5,600 students. It will provide a home for research focusing on aerospace, semiconductor technology, biotechnology, data science, hazardous weather forecasting, and air quality. 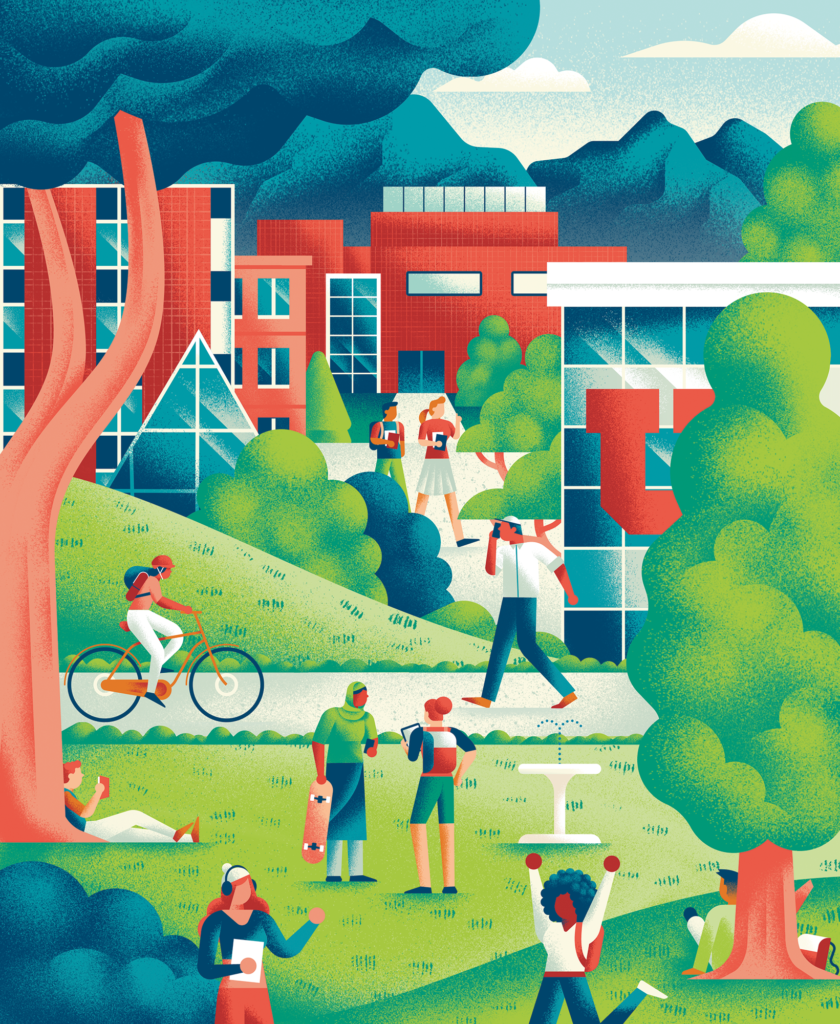 Bonus Stop
Some 320 miles north on the border of Idaho and Montana lies our last stop. What may appear to some as the set of a Western flick is actually a small retreat on 16 acres of pristine wilderness in Montana’s Centennial Valley that used to be a farming outpost. So, what does a complex like this have to do with the U? Well, after lovingly restoring the buildings, John and Melody Taft and Bill and Sandi Nicholson gifted the space to the U in 2013 to be used to ignite and foster a passion for nature and stewardship in students. Charming and elegant guest cabins, a dormitory, a large conference room, and a dining hall now host various student and artist-in-residence programs.

About the author: Seth Bracken is editor of Utah Magazine.

Indigenous Land Acknowledgment: We acknowledge that this land, which is named for the Ute Tribe, is the traditional and ancestral homeland of the Shoshone, Paiute, Goshute, and Ute Tribes. The University of Utah recognizes and respects the enduring relationship that exists between many Indigenous Peoples and their traditional homelands. We respect the sovereign relationship between tribes, states, and the federal government, and we affirm the University of Utah’s commitment to a partnership with Native Nations and Urban Indian communities through research, education, and community outreach activities.

1900: Registration for classes at the new campus opens on Oct. 1 and 183 students enroll

1901: The State School of Mines is established

1903: Joseph Maddock joins the U as Athletic Director, boosting sports programs across campus

1904: Students start an Arbor Day tradition of planting trees, some of which stand today in Presidents Circle

1905: Two-year medical courses begin in the Department of Biology with 14 students

1907: The block U is constructed on the foothills above the university

1908: Greek life arrives with the founding of the  Beta Epsilon Chapter of Sigma Chi

1909: A state bacteriologist and pathologist position is created

1911: The U launches 31 extension courses in 15 communities around the state

1912: The medical program is created as a separate two-year Medical School

1913: The law school is formally established

1914: The U begins offering correspondence courses in civics, psychology, and history of education

1915: The Academic Senate is formed to address issues of academic freedom

1916: The School of Pharmacy is established

1917: The business school is founded as the School of Commerce and Finance

1919: Regular instruction of the ROTC begins

1921: The first Homecoming Week is held at the U

As you stroll the paths, consider some of the inspiring people who studied in this exact location. From authors to actors and activists to researchers, here are a few who you could’ve bumped into if you were right here a century or so back.

African American rights activist and Harlem Renaissance writer Wallace Thurman, author of The Blacker the Berry: A Novel of Negro Life, was on a pre-med track when he attended the U from 1919-20. He later moved to New York and worked with the likes of Zora Neale Hurston, and he even wrote a play that ran on Broadway.

One of the first-ever Rhodes Scholars, Ralph Hartley was a founding figure in the field of information technology. He graduated from the U in 1909.

Martha Hughes Cannon enrolled in then-University of Deseret at the age of 16 and graduated with a chemistry degree in 1878. She went on to become a Utah state senator, women’s rights advocate, suffragist, and physician.

The actor behind the cantankerous neighbor George Wilson in the television series Dennis the Menace and the voice of the doorknob in the original Alice in Wonderland—
Joseph Kearns—studied at the U. He taught theatrical makeup classes to fund his tuition studying music at the U in the 1920s.

Emma McVicker became the first woman regent at the U in 1896. Four years later, she would earn a bachelor’s degree here. A fierce advocate for children and education, she founded Utah’s first free public kindergarten. She went on to be Utah’s first woman state superintendent of schools in 1900. It took 109 years for another woman to fill that post.

Before he was president of The Church of Jesus Christ of Latter-day Saints, David O. McKay was a player on the U’s first football team. He graduated in 1897 as valedictorian and class president.