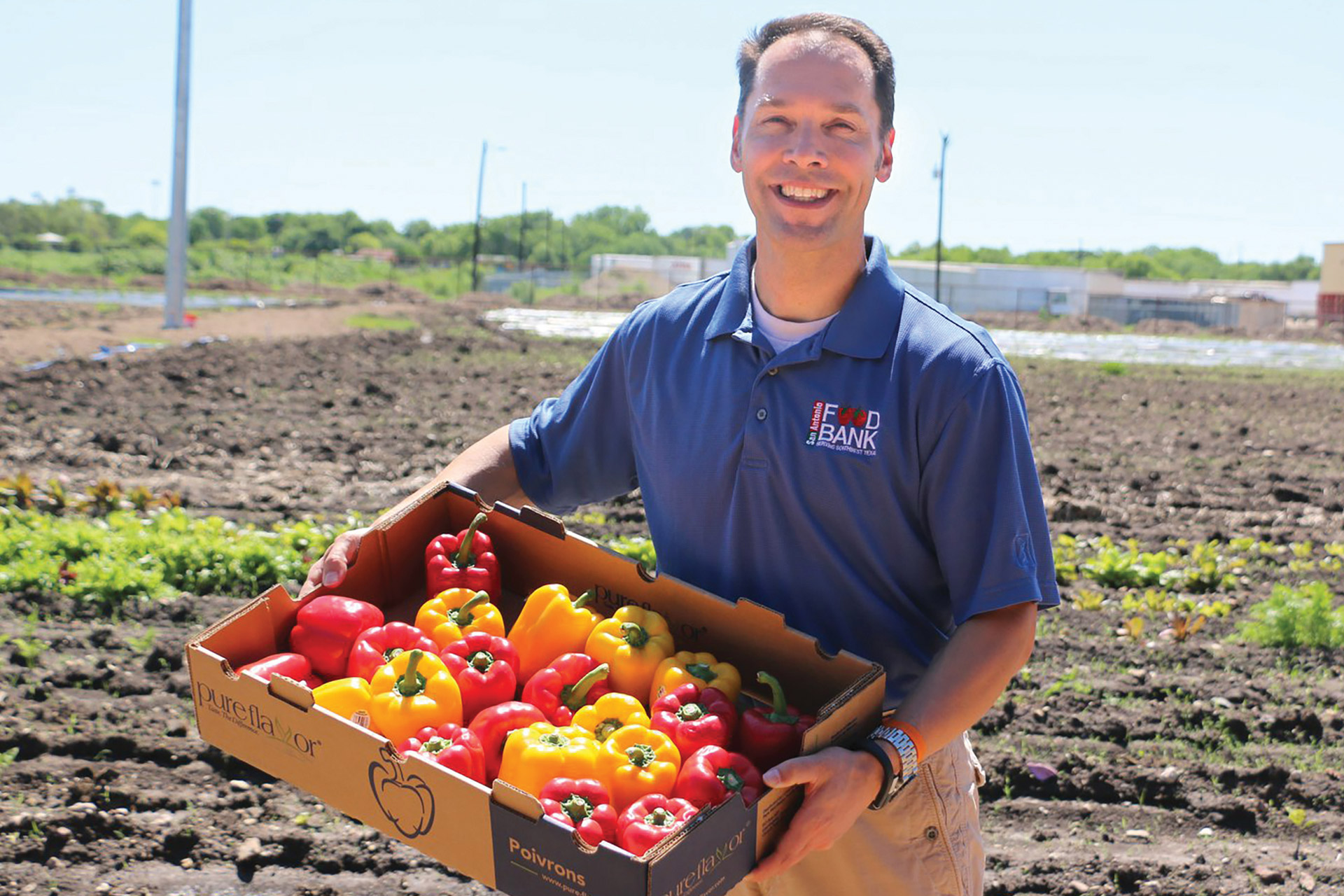 A homeless man ambled across the alley next to the shop. “Looking closer,” Cooper remembers, “I realized it was my dad.” Cooper’s father had been staying in a trailer and survived thanks to the kindness of a local cannery owner who helped struggling people in the area. What began as a journey for Cooper to scold his father for having left his family with nothing became a catalyst. Returning home, the 24-year-old volunteered at the Utah Food Bank, where he was quickly hired and rose to deputy director. “Finding him homeless caused me to pivot from working for a start-up to nonprofit,” Cooper says. “I could no longer see someone in need as a stranger. I saw them as my dad.”

In 2001, Cooper took the reins of the San Antonio Food Bank as the youngest CEO in its history. Since then, the food bank has grown from a staff of 18 to a powerhouse of more than 250 employees moving 85 million pounds of food to people in need across 16 counties in southwest Texas.

“We run on just 2 percent administrative overhead and are normally among the top 10 nonprofits in the U.S.,” Cooper says. “For every $1 we take in, we can provide seven meals. That kind of ROI is encouraging to ‘investors’ who support the food bank. Those are business principles I learned at the U.”

But it’s not just business for Cooper. Those who work closely with him note his genuine care for those in need. “The food bank has weekly mega-distributions where we provide food for 1,000-2,000 families,” says Alejandra Sanchez, Cooper’s assistant. “Eric has been to every single distribution.” At one, Sanchez recalls, Cooper met a family who also needed food for their cat. “He personally made sure their whole family—including their pets—didn’t go hungry."

Cooper’s philosophy on hunger involves adopting a three-tier strategy. Food for today means addressing the immediate need for nourishment with groceries or a hot meal. Food for tomorrow seeks to stabilize households by connecting them to long-term resources, like SNAP. Food for a lifetime is about helping people become self-reliant through workforce development and job placement as well as nutrition and meal preparation classes.

“Hunger is a bigger symptom of poverty,” Cooper says. “But when someone is hungry, you can’t start to address their other problems until you’ve solved that one.”

The economic hardships posed by the COVID-19 pandemic have challenged food banks across the country, including in San Antonio. Over the course of 2020, Cooper notes, “We went from feeding about 60,000 people per week to 120,000.”

Pondering the role of the food bank and helping the poor, during the pandemic and beyond, is a nearly ever-present reality for Cooper. “People have to choose whether to insert themselves into that equation,” he says. “Time and again, I see that when they do, they receive more than they were offering. That’s certainly been true for me.”